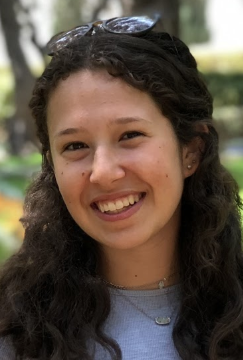 These last ten days have been a much-needed and meaningful Pesach break! By Thursday morning we all had gone to either meet our families in Israel or travel elsewhere. I went to Ben Gurion Airport with some of my friends to meet up with our parents who happened to be on the same flight. It had definitely been a long time since we had seen our parents, and it was great to be reunited. Aside for my mom, who had travelled to Israel on USY Pilgrimage as a teenager, it was my family's first time in Israel. I felt like an expert as I gave them the same history lesson our teacher Elhanan had given me throughout our drive into Jerusalem.

We spent our first two days exploring in Jerusalem, which basically meant lots of eating and shopping! On Friday night we got together with seven other JDS families for a seder, which was amazing. Even though my friends and I had only been apart for just over a day, we were all still excited to see each other and spend time together.

The next few days were spent with our tour guide, Hillary Menkowitz. She showed my family all over Jerusalem, including the four quarters of the Old City, the Israel Museum, and the City of David. Although lots of what she taught us I had already learned on the trip, it was still so engaging and interesting to hear it told in a new way. Next she took us down south to Masada, Ein Gedi, and the Dead Sea. These classic landmarks were just as fun visiting the second time around! When we hiked up Masada with Muss in early March before dawn, all of my classmates assured me that when I came back in April it would be too hot to climb. Luckily, Israel's abnormally long and cold winter this year worked in our favor, and my family was able to make it to the top easily! My family also loved floating in the Dead Sea, and the beach we were at had unlimited mud just below the surface, unlike the beach we had visited with Muss where we had to buy the mud.

Our last excursion with Hillary was an archeological dig in Beit Guvrin. At the dig, we entered an ancient cave and dug for artifacts, which were mainly broken pottery pieces and bones. I didn't find much, but my sister hit the mother lode and had a bucket full of treasures. It was very cool to dig up materials used by people over two thousand years ago.

We then drove to Jaffa, which is the southern and oldest part of Tel Aviv. After finally finding a parking spot, we went to find lunch. Jerusalem definitely had more kosher for Passover options, but we were still able to find an excellent meal. It was a welcome change to be walking in the warm sun along the Mediterranean after being freezing in Jerusalem only hours earlier.

Before my parents arrived, I made them promise that I would have at least one day in Tel Aviv to relax on the beach, and that promise was kept! After having activity-filled days for the majority of our trip, it was nice to have nothing on the itinerary. My family enjoyed running along the beach, more shopping, and more delicious food. The weather got warmer every day, and by Friday I finally mustered up the courage to dunk my head under the water. Many of my friends were also staying nearby, so I got to spend beach time with them too. After being with everyone 24/7, a week apart felt like forever!

Being in Israel for Passover has been especially amazing because kosher for Passover food in Israel cannot be compared to what we are used to in the US. Days of matzah pizza and macaroons were replaced with real food, which was so weird! I was even beginning to forget that it was Passover until practically all of the stores and restaurants were closed Thursday night because of chag.

It has been great being in charge of my schedule and having a chance to relax, but I am excited to go back to the program on Sunday.