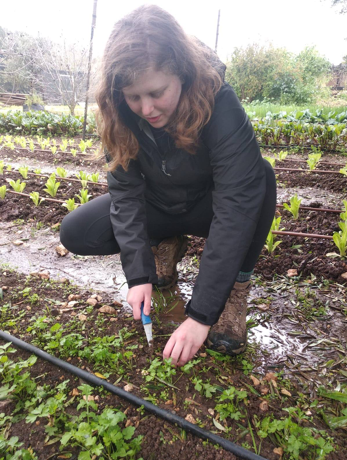 This week unfortunately was my last week volunteering at the Hava V'Adam ecological farm. With only four days left to soak up all the vegan food and ecological products that we could, my group threw ourselves into life at the farm. Fresh off of our relaxing, or not so relaxing, free weekends, we spent Sunday and Monday doing mud-building workshops. I worked with some others building a wall out of mud bricks around the farm's generator. We made many batches of mud, completely destroyed all of our clothes, and had a mud fight or two.

Tuesday was election day here in Israel, and all of the people who live on the farm went home to vote. Our madricha, Michal, also had to go to Tel Aviv to vote, and she decided to turn the day into a group trip to Jaffa. We were all pretty psyched to eat some non-vegan food and gorged ourselves on grilled cheeses, Turkish breakfasts, and iced coffee at a restaurant in the Jaffa market. While some lingered to shop, most of us made a beeline for the beach and spent the rest of the day soaking up the hot Israeli sun and swimming in the water alongside what seemed like every resident of Jaffa (apparently election day is pretty synonymous with a countrywide beach day.) I successfully managed to lie in the sun without getting a full body sunburn, so I considered the day a success. When we got back to the farm, we relaxed a bit, ordered pizza (don't worry, you're allowed to have dairy products on the farm), and watched election results come in with mixed reactions. Overall, the day proved a relaxing break from our work, and allowed us to be rejuvenated for our final two days at the farm.

On Wednesday morning, I worked in Tzimchi, or herbal medicine. We spent the morning making essential oils, so I spent multiple hours picking lavender, pulling the leaves off of the stems, and cutting the leaves until they could be compressed in a machine that makes oil. With my entire body smelling like lavender, I joined the rest of the group in the afternoon to work in the fields. I weeded, hoed, and spread mulch across a few garden beds, and felt very farmy. It seemed like the proper conclusion to my work at the farm. That night, the entire farm community, mostly comprised of people on gap years before the army or groups visiting from other countries, threw us a goodbye party, where we danced and sang all together. That also felt like a great conclusion to our time as part of the community on the farm.

Thursday, our last day, went by in a blur of bonding games, packing, and goodbyes. For me, leaving the farm was bittersweet. Conditions on the farm are a bit rugged--we used compost toilets, had freezing showers, and slept in domes not quite closed from the outdoors. There was a part of me that, after three weeks, was ready to return to more modern civilization. But I will admit that I sort of came to love our gross dome and had grown accustomed to living alongside random bugs and using toilets without running water. Leaving all of that was a shock, and not a completely positive one. Also, the 21 of us on the farm became super close during our three weeks together. Going from that small group back to our bigger one was a difficult transition. While I was super happy to see my friends who had been on other volunteer periods, I did miss the dynamic of a small, tight-knit group. But overall, I do think this volunteer period was the right length. Had it been any longer, I think we would've started to get fed up with each other and the farm in general. Leaving after three weeks, I was left feeling only positive feelings toward the beautiful farm on which we had lived, and the experience that we had. And I will admit, the schwarma I had for dinner on Thursday night was glorious. I was ready to leave my #veganlife behind.

On Friday we took a relaxing tour of the Baha'i gardens in Haifa, then had some free time in beautiful Zichron Yaakov. Coming off of three weeks of (almost) veganism, I was more than happy to indulge in pizza and gelato. And finally, we headed back to Hod Hasharon to end the week with a relaxing Shabbat on campus.