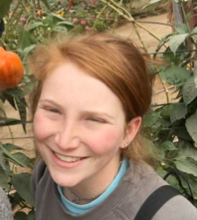 *Shira is volunteering with HaShomer HaChadash, an organization devoted to safeguarding agricultural lands in Israel. Her group is working in the Arava region of the Negev.

My second week of volunteer period began with pepper picking and a trip to a museum. Every year my mom, my sister, and I go strawberry and blueberry picking. However, I have never picked peppers and was very excited to experience picking something new. The moshav we are staying on, Hatzeva, is known for its peppers, and I can definitely say the peppers did not disappoint. We picked red, orange, and yellow peppers with clippers given to us by the farmers. I have never seen so many peppers in one place; it was a truly beautiful sight. I had lots of fun picking them and watching the baskets fill up. After work, which usually starts at around 7 am and ends at 11:30 am, the group headed to our daily lunch spot, a high school located on the moshav called Adam VeAdama. The food is consistently delicious especially after a long days work and the students are always nice and welcoming. Towards the end of the day we visited a museum on the moshav that told its history and the science behind its agriculture. The museum was very fun and had many interactive stations, however I did not find the exhibit's' scattered boxes filled with bees pleasant. The day ended with our daily communal cooking of dinner, which I always find very enjoyable and bonding.

The next day, Tuesday, began our two days of painful pricks as we started working with date palms. They may look like ordinary palm trees, but do not be fooled. They have very sharp spikes at the end of every single leaf! Our job was to count 30 date strands and tie them together in a ring shape so the dates could grow in the middle. I found the work fun and very rewarding, but the pricks hurt and definitely left their mark. Later that night we had a movie night with some of the students from Adam VeAdama. I got to meet more people my age, which was very fun and I even got to practice my Hebrew.

Wednesday was our second and final day of pricks which was still pretty painful. However, after work the whole group got to go on a amazing guided bike ride through a dried up river. The sites were unforgettable and the experience was unique. Personally, I had a lot of trouble learning how to ride on a rocky terrain. At first, I fell a lot and at some points wanted to give up, but the guard that came along with us on the trip stayed with me, as I was often very far behind the group, and helped me get used to the path. Eventually I became confident and was able to catch up with the group. I am very grateful for the guard and later thanked him for his kindness.

Thursday was the last day of work for the week and the last day that we would be on the moshav until Sunday. The work was rough as it was pulling weeds, which is a job that the group has become a bit tired of since it was what we did the majority of the first week. Also a lot of us felt very sore from the bike ride, which did not make work any easier. I personally felt sore from the falls I took, but nonetheless we worked as hard as we could. When we got back to the moshav we all packed our things for the free weekend. I was sad to leave the place I have learned to called home for the past two weeks but I was also excited to see my friends who were at other volunteer locations. The bus ride back to Hod Hasharon was long, but it gave me time to rest up after the long week. Volunteer period has been a blast and I cannot wait to return to the Moshav on Sunday.