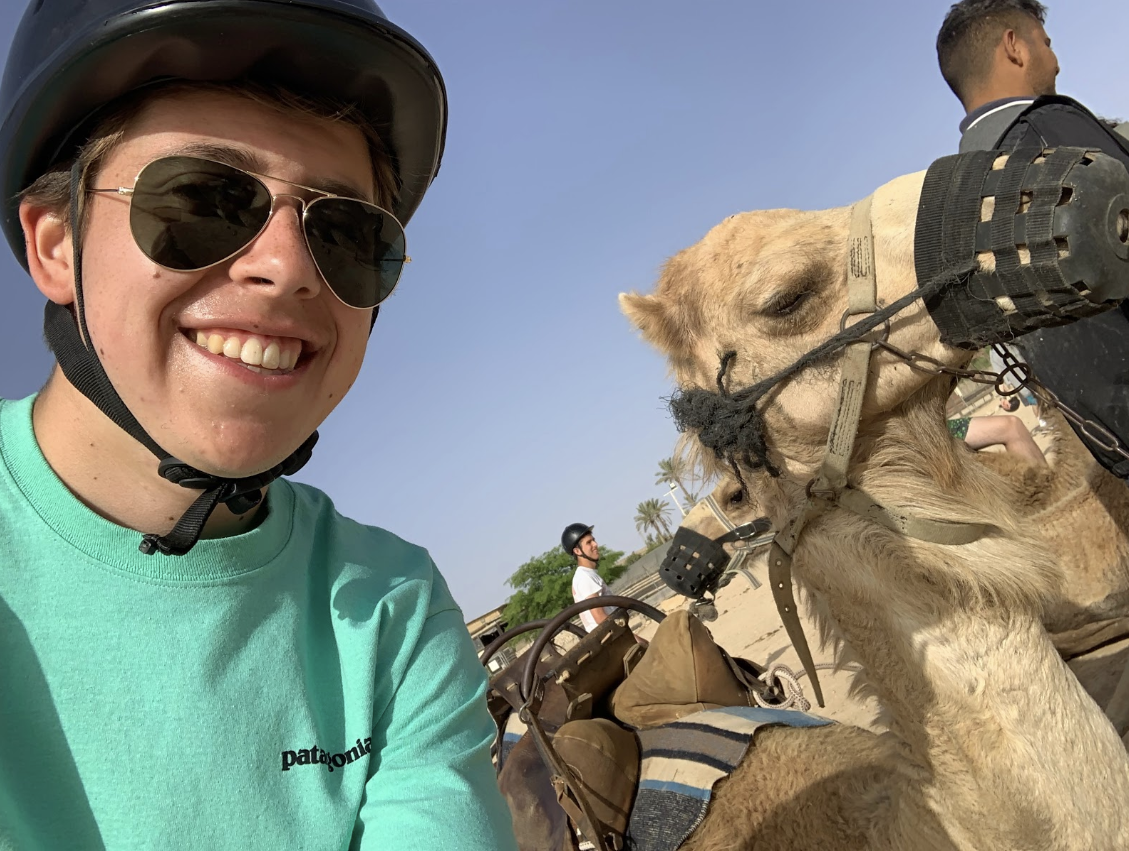 After a physically and mentally challenging experience at Gadna, we kicked back a little bit for an exciting weekend in the Negev. We took in the incredible view of Makhtesh Ramon, an immense crater formed naturally from wind and water, and later enjoyed sliding (and sometimes flipping) down sand dunes of fine, Egyptian-like sand. For Shabbat, we settled down at Kibbutz Yahel, a flourishing oasis in the middle of the desert near the Jordan border, where we learned first-hand about Yahel's agricultural efforts and the struggles of modern kibbutzim. 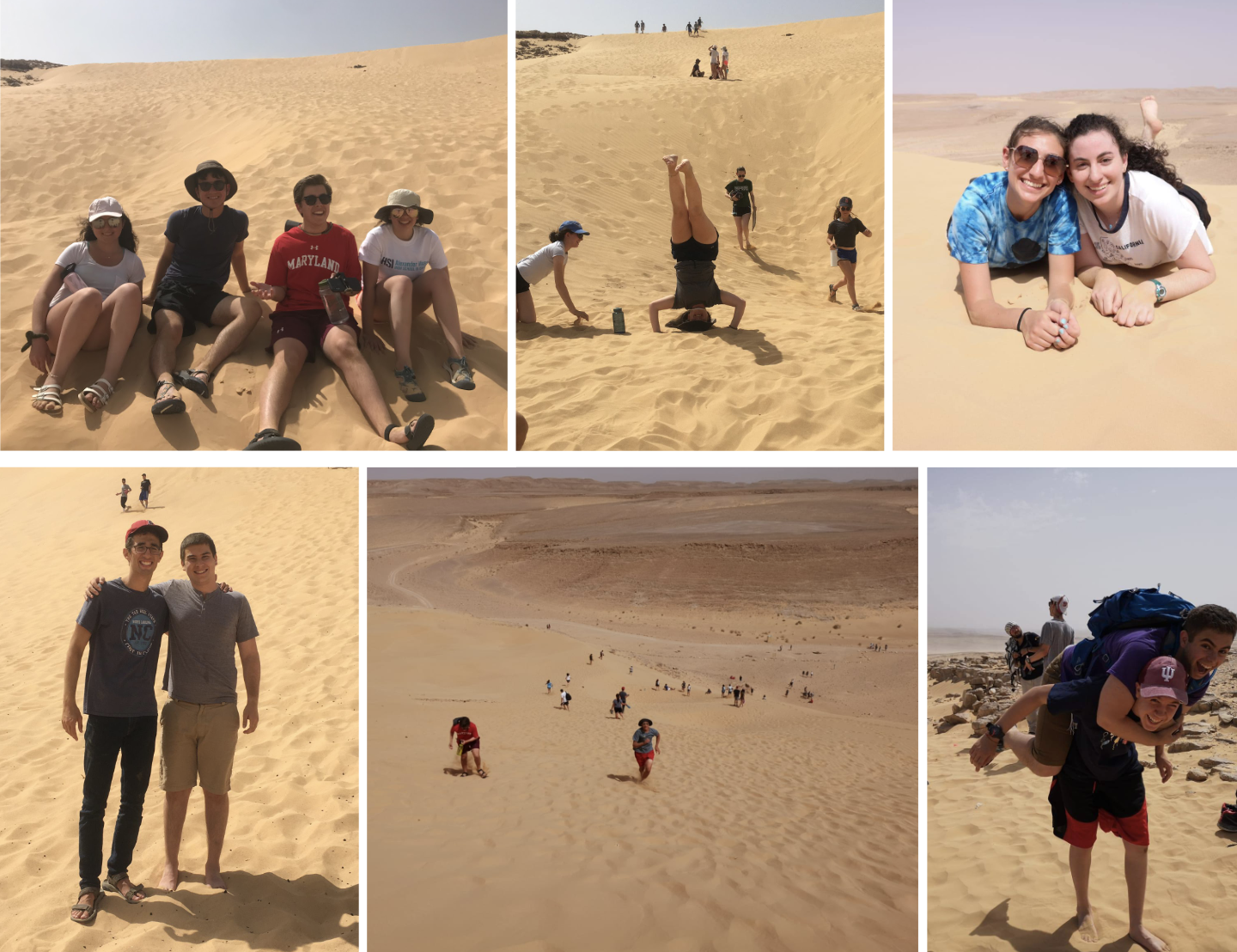 The next day, we awoke early to travel south, where we would be hiking in the mountains surrounding Eilat. I surprised both myself and others by opting for the longer and more strenuous hike, and once I reached the final peak after more than three hours of hiking, I felt accomplished and knew that I had made the correct decision by pushing myself. After a long morning of hiking, we cooled off with a snorkeling experience which frankly I thought was underwhelming, but that may have been because I spent more time trying to learn how to breathe through the mask than looking for underwater creatures. We spent that night at a Bedouin tent which gave us a taste of Bedouin culture, including the experience of eating a traditional Bedouin meal on pillows on the ground. We rounded out our last day in the Negev with an exciting (but quite touristy) camel ride in the desert, a trip to an Israeli "development town," and a refreshing dip in a desert spring. 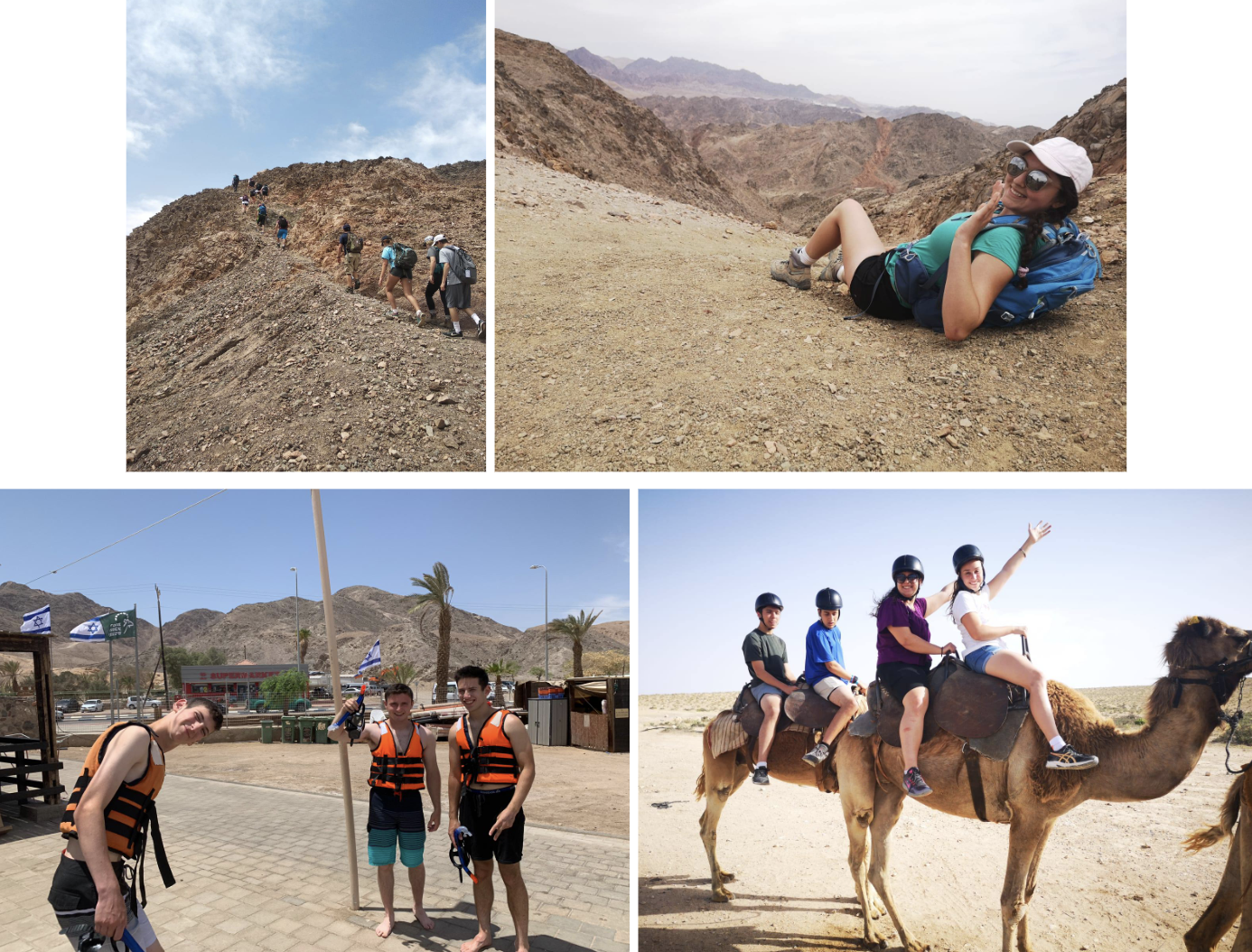 On Tuesday, we heard from leaders of different Jewish groups in Israel in order to gain a deeper understanding of the complexity of Judaism in Israel. We heard from a conservative Rabbah, a female Rabbi; a founding member of Women of the Wall; and a Haredi Ultra-Orthodox Jew who made Aliyah from the U.S. It wasn't until having this experience that I fully understood how difficult it is for non-Orthodox Israelis to live a Jewish life in Israel. Because the government gives religious authority to only the Rabbanut, an Ultra-Orthodox religious institution, most Jewish rites, such as marriage, divorce, and funerals can only be considered legal in Israel if performed by an official of the Rabbanut. Therefore, rites performed in a Conservative or Reform synagogue are not deemed legal. It made me quite upset to hear the many stories of less observant and secular Israelis who, despite living in the Jewish state, often feel alienated from Judaism and want no part of it.

On Tuesday evening began Yom HaZikaron, the day of commemoration for Israel's fallen soldiers and victims of terror. We attended a Yom HaZikaron tekes (ceremony) at Latrun, a fortress near Jerusalem that was a battleground during the 1948 War of Independence. Surrounded by other Americans, Israelis, and people from across the world, we heard inspiring yet devastating stories of brave soldiers who were killed in Israel's wars. For me, the most powerful moment of the tekes was hearing the stories of the heroic lone soldiers who made Aliyah to Israel to serve the Jewish state but were killed in battle. I was on the verge of tears hearing the painful testimony of the parents of lone soldiers who were ripped apart after the death of their child. I also found it very interesting that not only were victims of terror attacks in Israel honored, but also the victims of the recent antisemitic attacks in Pittsburgh and San Diego. At the end of the tekes, we all rose and sang Hatikvah together, and at that point I had never felt more connected to Israel and to Jews around the world.

The following morning we attended another tekes for Yom HaZikaron, this time on campus at Hod Hasharon along with the Israeli students at the school there. It was incredibly meaningful and emotional to stand together with the Israeli community during the siren that is heard throughout the country on Yom HaZikaron to commemorate the fallen soldiers. The deafening wail of the siren reminded me of the deafening silence and emptiness which families of fallen soldiers experience on a daily basis. I also was reminded of the Yom HaZikaron ceremonies we had had throughout the years at JDS, as the Israeli students sang songs that we were familiar with from JDS. In the afternoon, we visited the Yitzhak Rabin Museum, where we witnessed the outstanding life and accomplishments of Rabin and his contributions to Israeli society.

Wednesday night began Yom Ha'Atzma'ut, Israel's Independence Day. Israelis have to make the quick transition from the somber day of Yom Hazikaron to the festive day of Yom Ha'Atzma'ut. We followed this transition ourselves and went to an exciting Yom Ha'Atzma'ut celebration Wednesday night in Hod Hasharon, which included performances by Israeli artists and an amazing fireworks display. The next day, we went to a beautiful beach in Herzliya where many of us played the traditional beach tennis game of matkot. We later had a barbecue which is typical of how Israelis celebrate Yom Ha'Atzma'ut. Seeing Israeli flags and banners throughout the country and celebrating the day among Israelis really allowed me to feel immersed in Israeli culture and feel truly grateful for the existence of a Jewish state.

Before heading to our open Shabbat on Friday, we split up into different groups to explore the artistic side of Tel Aviv. My group took a graffiti tour through the Florentine neighborhood, and I thoroughly enjoyed getting to see a different side of Israel by walking down streets and alleyways to witness cool displays of street art. After a long and emotional week, I'm looking forward to relaxing over the free weekend in preparation for Yam el Yam, our four-day hike from the Mediterranean Sea to the Kinneret. 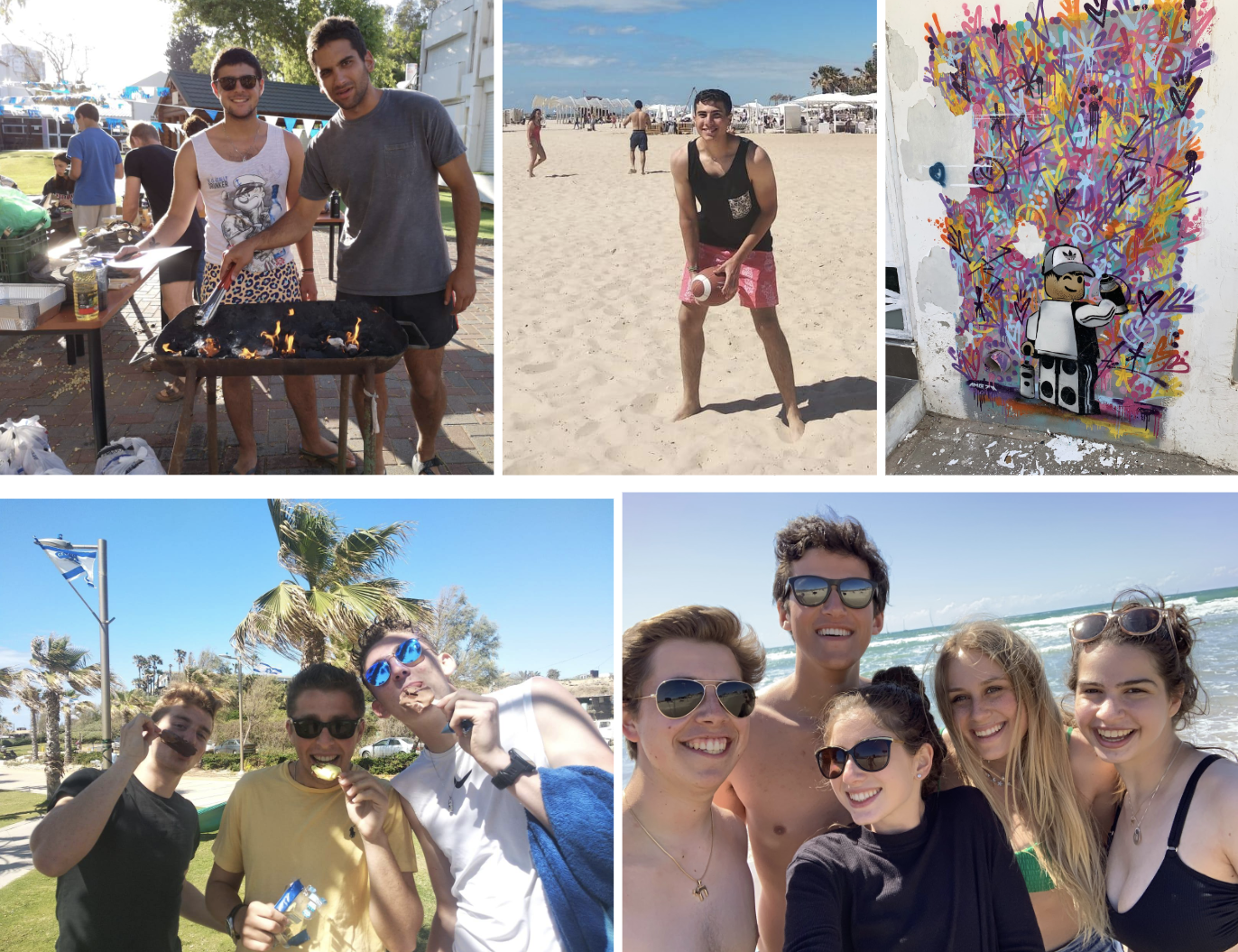