Students will first travel to Israel, where they begin their incredible Jewish journey They travel to Europe for 8-9 days part-way through the program. This schedule enables students to engage in the chronological approach to historical education that is the hallmark of the AMHSI program. Students will then return to Israel and continue their study and engagement. 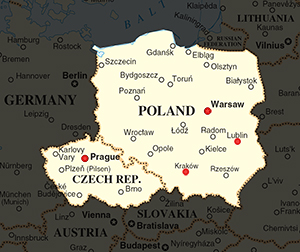 Nozyk Synagogue – One of the five largest synagogues in 20th century Warsaw and the only synagogue in the city to survive the Holocaust.

Warsaw Ghetto – Visit includes an overview of the Warsaw ghetto and its geography, viewing the remaining pieces of the original ghetto wall and Korczak’s orphanage.

Jewish Cemetery – One of the largest Jewish cemeteries in the world and the burial site of many greats in Eastern European culture and thought.

Umschlagplatz – A train station. Not an ordinary station. It was from this spot that the Jews of Warsaw were deported to Treblinka.

Notorious Nazi death camp where 350,000 Jews were murdered. Majdanek was liquidated in 1944 as the Red Army advanced. The Nazis destroyed documents and set fire to some of the buildings. In their haste, they failed to destroy the gas chambers. This is the only death camp that remains almost completely intact.

Remuh Synagogue – Originally built in 1553, this synagogue was named for Reb Moses Isserles (known as the “Remuh”), author of the Mappa, a study of halakhah from the Ashkenazic perspective, and also a noted astronomer, historian, philosopher and geometrician. During the Holocaust, the interior of the synagogue was destroyed, as were many of the matzevot (gravestones) in the small adjoining synagogue.

The Tempel Synagogue – Completed in 1862, the Tempel Synagogue was the last synagogue to be built in Kazimierz, the Jewish district of Krakow. The synagogue followed the Reform rituals, including choir singing, organ music and the offering of sermons in Hebrew, Polish and German. During the Holocaust, the Nazis used the main sanctuary as a horse stables. 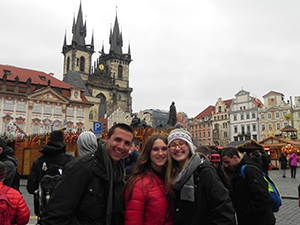 One of the oldest, most historically significant, and most beautiful cities of Europe. The Altneuschul (Old-New Synagogue) is the oldest synagogue in continuous use in Europe, dating to the 13th century, and the Jewish town of Prague (Josefov district) is comprised of historic synagogues and Jewish museums.

The Old-New Synagogue (1694) – one of the oldest synagogues in Europe, built in the early Gothic style of the late 13th century.

The Old Jewish Cemetery (15th century) – one of the most memorable Jewish burial grounds in Europe.

The Hall of Ceremonies (1906) – exhibition of drawings by Jewish children interned in the Terezin concentration camp during World War II.

Known as a “model ghetto” by some accounts. Terezin served as a concentration and transit camp for some of the most prominent Jews of Western Europe.