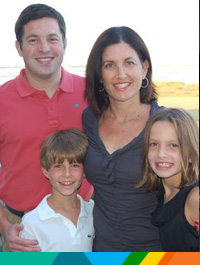 Chuck Fox '91, fondly remembers his time at CESJDS, where he says he learned to be a leader, set an example, and do the right thing

Active in CESJDS life, Chuck played varsity soccer, was the news editor of The Lion's Tale, a Color War captain, and Student Council Treasurer. While he enjoyed all of these activities, he described receiving the Science Award for Excellence in Physics from Mrs. Jacobs the "crowning achievement of my life."

After graduating from University of Maryland and then Harvard Medical School, he completed his residency in internal medicine at Massachusetts General Hospital in Boston and a fellowship in gastroenterology at the University of Virginia in Charlottesville. Today, Chuck is the Medical Director of Atlanta Gastroenterology Associates' Midtown Endoscopy Center, and was named to Atlanta Magazine's "Top Doctors" Guide in 2011. In addition, Chuck is a Clinical Assistant Professor at Emory University and serves as Medical Director of Emory University Hospital Midtown's Endoscopy Unit.

Chuck says, "Being at CESJDS taught me how important it was to have Judaism in my life and pass that onto my children." He is proud that he and his wife, Amy, send their twin nine year olds, Sydney and Ben, to The Epstein School, a Jewish Day School in Atlanta. Chuck is grateful that he can share his Jewish Day School experience with his children. "Actions speak louder than words," Chuck explained.

He saw his CESJDS experience come full circle at his 20 year reunion held last year at the Lower School, where he saw many of his closest friends with whom he is still in touch. The highlight was seeing his son playing ball with a boy who looked exactly like the boy's father, classmate Josh Milner '91.

Chuck always took on leadership roles, in school and in his adult life. Chuck sees leadership as a recurring theme - a default role - starting with his years at CESJDS. His leadership roles as a community volunteer, a father, a baseball coach and a physician, are all because he's secure in what he believes, and constantly strives to do the right thing. In fact, just this week, Chuck earned the "Positive Coaching Alliance" award as AA baseball Coach of the Year from Atlanta's popular Northside Youth Organization.

Chuck's volunteer leadership hits close to home. He and his family are very involved in the Cystic Fibrosis Foundation. Chuck was born with CF, but is doing very well with new medications and treatments. His disease doesn't keep him from putting his strong beliefs to work, to continue to do the right thing, wherever it's needed.