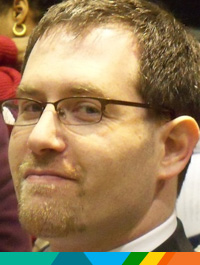 Zeke Vanderhoek is an educational innovator who is the founder and principal of The Equity Project (TEP) Charter School in New York.  The Equity Project is most noteworthy for its educational philosophy rooted in the research-based conclusion that student success, particularly for those from low-income families, is directly related to high teacher quality.  As such, TEP is focused on recruiting and retaining master teachers, and provides starting salaries of $125,000 per year.  Zeke is also the founder of Manhattan GMAT, a national GMAT test-preparation company.  He stepped down as CEO of the company in 2007 to begin TEP.

Watch the 60 Minutes interview of Zeke with Katie Couric.

Zeke was a "lifer" at CESJDS, starting in Kindergarten and graduating in 1994.  He was joined by his brothers, Matt '93 and Sam '01.  Growing up in Bethesda and coming from an academic family (his parents are both academics and researchers), Zeke found the environment at CESJDS to be challenging, but it also gave him an "opportunity to be heard."

Zeke recalls, "I have such great memories of Mrs. Carole Powers who was Chair of the history department.  During a seminar on Vietnam, the expectations were so high.  She asked tough questions, and didn't give us the answers.  We had to figure things out for ourselves."  Other teachers that were impactful for Zeke were Mrs. Lowey in the first grade, and Dr. Gil Cook, who Zeke remembers as an excellent listener.

After CESJDS, Zeke went on to earn a B.A. from Yale University and an M.A. from Teachers College at Columbia University.

Zeke began his educational career with Teach for America where he taught at a middle school in Washington Heights, Manhattan.  "I learned so much from these students and began to think of ways to make real changes in how we educate our children."

Looking back, he remembers, "The pluralistic environment at CESJDS was so important in creating a caring community.  It is partly because of this experience that I have been able to pursue the idea of a new model in how we provide education."

Zeke's passions and commitment are embodiments of so many precepts at CESJDS - Tikkun Olam (To preserve God's world by making it just and being committed to social action), Torah L'shmah (To become a lifelong learner), and V'ahavta L'rayakha (To create a caring, moral community).