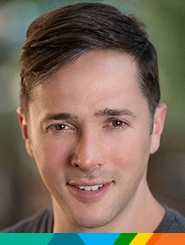 Ever since Kindergarten at CESJDS, Yuval David knew he wanted to be an actor. Having been performing since childhood, Yuval's career has led him to act in theatre, television, film, and web. Based in New York City, Yuval is keeping busy as an actor, host, and voice-over actor.

Yuval is a CESJDS lifer, having attended from Kindergarten through 12th grade. Yuval gives credit to the artistic and performance opportunities at school that nourished his beginnings as a performer. From the school plays to the choir, the rock-band, and art and photography classes, Yuval developed his artistic sensibilities. His mother, Ziva Cohen, who is a renowned dancer, choreographer, and teaching artist also provided great encouragement and development of his artistry.

In the early years at CESJDS, Yuval recalls how well theater and the Arts complemented his learning. "Doing the school plays in English and Hebrew was a highlight of every year. The Hebrew plays tended to always be a hoot, especially with the inventiveness of the Hebrew teachers in the Lower School, re-wording classic popular plays and songs to fit whatever Hebrew or Jewish history subject we were learning at the time. And singing in the choir, led by Mrs. Parness, was exciting, especially when we were invited to fancy venues."

Later, in the Upper School, Yuval was often found in the art studio, photography darkroom, theater, and the band rehearsal room. Yuval also was on the Cross Country and Track & Field teams, often serving as the captain or co-captain.

Outside of school, Yuval began performing professionally at a young age. He appreciated, and was honored, that fellow students and faculty would come to his shows.

"The CESJDS community was a family, an extended family. After spending 13 years together in my formative years, the bond was set and still exists today."

As a first-generation American, the fusion of the Israeli and American cultures prevailed, and being at CESJDS was a way to bridge two worlds. Yuval enrolled after his older brother, Ayal Cohen '94. Looking back, Yuval also credits the unique international diversity among the students and families at CESJDS. "I had natural friendships with Israeli students but was also fortunate to be a student at a time when there was an influx of Russian and Persian families. I understood the plight of new immigrants creating a new home, and the importance of helping our people no matter where they come from," Yuval says.

Yuval was heavily inspired by his Jewish identity and Jewish history classes to engage in social action and community service in the name of Tikkun Olam. This included speaking at inter-generational dialogues on Yom Hashoah, volunteering at the Hebrew Home, serving on the Montgomery County Youth Advisory Committee, and working with AIPAC.

During his years at the Upper School, Yuval was influenced by many members of the faculty. "Mrs. Claire Simmons, Mrs. Ellen Bresnick, Dr. Gill Cook, Mr. Nick Miller, Mrs. Sue Zuckerman, Ms. Gail Boyar, Ms. Bracha Ravin, Mrs. Sandy Kavilier, and Ms. Yaffa Dagony, among others, took so much time to help me grow as a student and filled me with self-confidence. The teachers became family friends as well as terrific mentors."

Yuval went to the University of Maryland on a full acting scholarship and was a Maryland Distinguished Scholar. After college, he moved to New York, and then back and forth between New York and Los Angeles, working professionally as an actor and host. Today, he is highly sought after for his acting skills. In 2016 his schedule remains full: this year he has played the lead roles in an off-Broadway play, two independent films, a new TV show, an ABC hidden-camera show, and his own one-man show in New York and Los Angeles. He also is the host of foodie and lifestyle shows. And, he regularly performs improvisational-comedy in addition to his original poetry and stories. Yuval is often in the recording studio, doing voice overs for animated films, documentaries, and commercials. He also teaches master classes in acting, improvisation, and character creation.