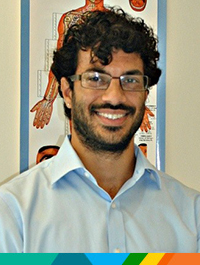 Yaron Cohen, L.Ac., Dipl.OM. is a Traditional Chinese Medicine and Acupuncture specialist practicing holistic medicine in Kensington, MD. He comes from a diverse family, with Hungarian, Yemeni, and Romanian roots.

Yaron's father, Eyton, emigrated from Israel to New York after serving in the IDF. In New York, he met Yaron's mother, Judy and shortly thereafter, they moved to Maryland to be closer to family, and start their own. Yaron and his sister, Liat Cohen '03, both spent their school years at CESJDS.

"The two major things that I tell people about CESJDS are that it creates a strong Jewish identity and that the school's commitment to pluralism makes that identity even stronger," Yaron says. Among the teachers he remembers most are Mrs. Edith Lowy, a Holocaust survivor and the subject of the play "To Life, L'chaim!" written and performed by Arielle Goldman '11. Yaron also credits Mrs. Rochelle Sobel, a beloved fourth grade Hebrew teacher who instills her students with a love of Judaics.

In the Upper School, Yaron participated in the Sephardic Minyan, which enabled him to develop an even more contextual bond with his Yemini family background. Mr. Nick Miller, a science teacher, was the Sephardic Minyan Advisor during Yaron's high school years, and had a profound influence on his students, including Yaron. Mr. Miller encouraged them to "embrace Sephardism (sic)" and to think about the world far beyond what they could see or feel in the classroom. CESJDS is fortunate that Mr. Miller continues in both of those roles today, while creating life-long and meaningful relationships with his students.

Relationships developed at Minyan and over the years at CESJDS, continue today. Attending the University of Maryland with other alumni, Yaron started out as a biology major, and switched to philosophy with a minor in Jewish Studies. His senior year, on a lark, he took a class on traditional Chinese medicine. "After that, I was hooked," he recalls.

A classmate, Danny Horowitz '99, travelled with Yaron to look at schools that provide training in traditional Chinese medicine. After four years of study in Los Angeles, Yaron has settled into his practice, and now works with patients to help them explore the answers they need.

Yaron credits the learning culture at CESJDS for guiding him to where he is today. "The environment there encouraged us to always question and we were free to debate with our teachers and with each other. This approach was the same in a Talmud class or in a biology class. Not surprisingly, Holistic medicine takes the same view, so it felt very natural to me."

"Each day, I use the training and values from CESJDS and apply these to help people who have just about given up."