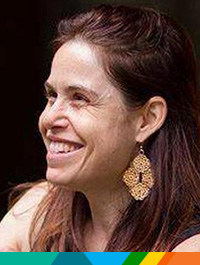 Yael Luttwak '90 is a filmmaker, founder of the non-profit organization A Slim Peace, and will be producing the CESJDS 50th Anniversary Celebration video.

Her path to CESJDS began in Kindergarten, but then paused until 8th grade, when she re-enrolled after asking her parents for a strong Jewish education. One year later, her brother, Joseph Luttwak '93, followed suit and enrolled.

Jewish identity and a love of Israel were very strong values for the Luttwak family. Her father, Edward, is a writer and strategist and her mother, Dalya, is a sculptor from Israel. Summers for Yael involved Jewish sleepaway camp - Camp Modin in Maine. There, the social connections, friendships, and love of Jewish community blossomed. Ten days before the start of 8th grade, she begged her parents to send her to CESJDS.

"I am still close with many of my CESJDS classmates. Our friendships were strengthened by shared values and a strong sense of community," Yael recalls. Also, the small classes and intimate relationships that existed between faculty and students were critical in helping her choose her profession and develop confidence. "Sue Zuckerman was an amazing member of the faculty. As the advisor to The Lion's Tale, she pushed me in new directions."

A key moment was when Yael interviewed Soviet Refusenik Ida Nudel for The Lion's Tale. "Having the chance to interview Ida Nudel and tell her story created my passion for storytelling. Mrs. Zuckerman helped me to develop that, and now I am a filmmaker."

After CESJDS, Yael attended the University of Rochester, served in the IDF as a tank gunnery instructor and lived in Israel and Europe, eventually attending the London Film School. Combining a passion for Israel and for Tikkun Olam, her film A Slim Peace told the story about the first-ever nutrition and weight-loss group of Israeli and Palestinian women as a way of showing the humanity and the humor in the Middle East. It premiered at the Tribeca and Jerusalem film festivals and has spawned the Slim Peace Organization that builds bridges to empower women through a health program. Yael's filmography includes My Favorite Neoconservative as well as To Step Forward Myself.

"I am very excited and passionate about the  CESJDS 50th Anniversary video. It is a great opportunity to tell the story of the day school in a constructive and at times comedic way that honors the past, present, and future," Yael says. "Knowing that CESJDS provides more than $5 million per year in tuition assistance to more than 40% of families speaks to me in a powerful way."

Yael lives in Washington, DC with her son.