Shira Kobren '02
Shira Kobren '02 fell in love with performing in kindergarten, when she played Gretel in the CESJDS production of The Sound of Music. Now 28 and living in New York, Shira is the lead singer, songwriter and manager of the four-piece kindie rock band, Shira & Friends. She credits CESJDS for teaching her the skills to run a successful business - including self-discipline, giving 110%, and, most importantly, how to multitask. 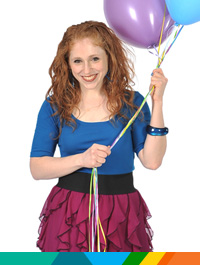 In high school, Shira considered a future in genetics, inspired by CESJDS teacher Kimberly Agzigian. But Shira's family and her CESJDS music ensemble teacher, Bruce Reifman z''l, encouraged her to face her fears and follow her dreams of acting and singing in New York.

Shira graduated from NYU's Tisch School of the Arts and found work as an actor in film, plays and commercials. To help pay the rent, she sang in cabarets and taught Hebrew and music to children. In 2010, Shira founded Shira & Friends, combining her love of music and her love of children. The group is increasingly popular in New York City, playing concerts at street festivals, summer camps, community centers and schools.

Shira & Friends recently released their first EP (extended play), When You're a Kid, to positive reviews. The five songs on the album, which is available at Shira & Friends and Amazon, address such kid-friendly topics as dancing, getting ready for bedtime and wanting a monster for a pet. The band soon will be releasing webisodes about things that matter to children, like how to be a pirate and how to blow a giant bubble with bubblegum. Shira's goal is for Shira & Friends to be a national act with a TV show.