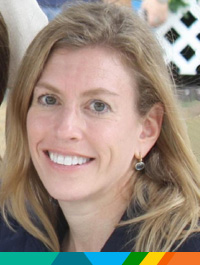 Shelley Raab Mendelow '83 is the Director of Recruitment at the Yeshivah of Flatbush in New York and the proud parent of three sons, all of whom attend or graduated from a Jewish Day School.

Shelley grew up in Kemp Mill, Maryland, and transferred to CESJDS in the 10th grade from what is now the Melvin J. Berman Hebrew Academy.  She was looking to maintain her Modern Orthodox traditions and wanted to experience the pluralistic environment in conjunction with an excellent academic program, and CESJDS was a great fit.

"Arriving at Charles E. Smith was an eye-opener for me.  For the first time, I had the opportunity to become immersed with other teenagers who were part of the wider Jewish community.  Here were all of these talented, dynamic kids learning Jewish subjects in a way that was different than what I was used to," Shelley recalled.

Looking back, there are several members of the faculty who had a major impact on Shelley.  "Carole Powers, who taught English and History, was the most influential teacher that I've had in my whole life.  She set a standard of excellence that I later used professionally when I worked as a financial analyst and English editor, and  which I have applied continuously throughout my life.  Rabbi Michael Shepard taught a Talmud class where we studied the book, As a Driven Leaf, by Milton Steinberg together with the Talmud text.  It was so powerful to learn how the Gemara influenced this amazing novel."

After graduating, Shelley went on the CESJDS trip to Israel and became fluent in Hebrew, falling in love with Israel.  She attended Barnard College.

In 1993, Shelley and her husband, Robert, decided to make aliya to Israel, where they began a family and pursued their careers.  Robert continued his work as a software engineer and Shelley transitioned from her work as a financial analyst to an English language technical editor.  Their three sons, Ari, Eytan, and Oren spent their early years living in Kfar Saba.

Later, Shelley and her family returned to the United States and then she decided to make Jewish education her career.  Shelley worked for twelve years as Assistant Director of Camp Nesher, a modern Orthodox sleep away camp in Pennsylvania and today she directs recruitment at the Yeshivah of Flatbush in New York.

Shelley lives in New Jersey with her husband and their three sons, Ari, Eytan, and Oren.  Ari, her eldest son, attends Rutgers University.