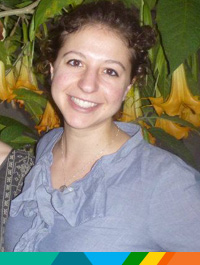 Self-described as a high school nerd who loved all of her subjects and extra-curricular activities, Shelby Zitelman has fond memories of her CESJDS teachers and coaches, and the friends she made and maintains to this day. Shelby feels blessed to have attended CESJDS from sixth grade until graduation and believes the school community made an incredible impact on her education and professional pursuits.

Following CESJDS, Shelby attended the Wharton School of Business at the University of Pennsylvania. She decided to pursue business because she was rather uncertain of her career trajectory and realized that business knowledge is necessary for any field.  Inspired by her entrepreneurial family, Shelby focused on entrepreneurship. The rigor of her CESJDS coursework helped Shelby to complete her Bachelor of Science in Economics in 2007.

During her last year at Wharton, Shelby worked at an economic development organization in Philadelphia, Ben Franklin Technology Partners, which turned into a full-time job post-graduation.  There she supported two early-stage venture capital funds, one of which was an angel investment fund and inspired her to find the path toward her passion.

Shelby was raised in a socially responsible household by philanthropic parents Rick and Cindy Zitelman, who instilled in her and her sisters Jackie (‘06) and Amy (‘07) the values of communal responsibility and tikkun olam. Thus it was not surprising that Shelby decided to directly serve the community through her work and created a concept to adapt the angel investment fund to philanthropy.

In May 2009, Shelby illustrated this model of a “venture philanthropy fund” and was accepted to the 2009 PresenTense Global Institute in Jerusalem, allowing her to spend a year in Israel.  While there, she completely immersed herself in all Israel has to offer, studying at the Pardes Institute of Jewish Studies, coordinating the first-ever Startup Weekend Israel, and supporting Asher Epstein ‘92 to launch the Global Technology Entrepreneurship Certificate – a joint MBA program between the University of Maryland and the Technion.

As Shelby developed this venture philanthropy model, in September 2010 she was asked to join the professional staff of PresenTense, which was growing in the United States. She now serves as Co-Director and is responsible for North American management, strategy and development. PresenTense is a non-profit organization with offices in New York and Jerusalem that transforms Jewish communities and empowers confident leaders through intensive business development seminars and volunteer mentorship opportunities.  Since 2007, PresenTense has worked with 425 entrepreneurs, over 500 organizational professionals and program participants, and more than 1500 volunteers in 12 Jewish communities around the world. In Washington DC, PresenTense has partnered with the Jewish Federation of Greater Washington to run the ConnectGens Fellowship.

Family and entrepreneurship run deep in the Zitelman family. In addition to PresenTense, Shelby has started a company with her sisters, Amy and Jackie called Soom Foods, LLC.  Soom Foods is introducing America to the delicious and nutritious (and gluten-peanut-and tree-nut-free!) 100% sesame Tehina.  The company imported its first container to the U.S. last month, and is currently selling Soom Foods Tehina at Shalom Kosher, Kosher Mart and Brookville Market, and online at www.soomfoods.com.