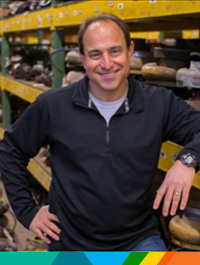 Saul Goldfarb is an entrepreneur and businessman.  After college, he began working for his family's business and loved it from the start.  Knowing that he wanted to make his own decisions and plot his own course, Saul decided to branch out on his own and founded Goldfarb & Associates, a diesel parts brokerage service specializing in diesel injection pumps, injectors and turbocharger cores.  Saul also has the distinction of having been a student at the first Solomon Schechter Day School in the Washington, DC region (the pre-curser to CESJDS) when it was located in the basement of Ohr Kodesh Congregation in Chevy Chase, MD.


Saul moved to the Washington, DC region from Brooklyn, NY when he was very young.   He recalls his years at CESJDS quite profoundly because those times were also momentous for Israel and for America.  He recalls the 1967 Six Day War as well as the assassination of Robert F. Kennedy during his formative years in Jewish day school.

In particular, Saul remembers Ms. Judith Barthold, his second-grade teacher who had such warmth and charisma.   "Her warmth and energy still stay with me today.  There were only about 30 students in the school in those days.  As a young boy, I had no idea of what the school would become."

After leaving CESJDS, Saul went to the University of Maryland at College Park and today is a respected businessman.  Saul and his wife, Elissa, are Hagshama (second generation) parents, having sent their three sons to CESJDS:  Michael Goldfarb '05, Scott Goldfarb '07, and Adam Goldfarb '11.  Hagshama parents are CESJDS alumni who have enrolled their children in the school and are committed to the future success of CESJDS.  Saul and Elissa are also part of a special group of Hagshama parents whose children are now alumni - perhaps sending a third generation to CESJDS in the future.

Saul remains extremely active in school life, having served on the Board of Directors from 1995-1999 and on the recent Head of School Search Committee.  Most importantly, Saul reflects back on the values he gained and continues to draw from CESJDS.  "I was educated in a place that emphasized the importance of morality and loving kindness.  I have taken these values to my business, where we treat all of our customers in a way that is unparalleled in my industry," he said.

Saul continues, "I owe my parents so much for sending me to this wonderful place.  And, I am so glad that I was able to pass this on to my kids."

Saul enjoys staying active and trains for triathalons and marathons with three other CESJDS parents of alumni.  He lives in Potomac, MD.