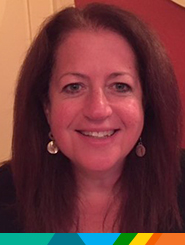 If you ask Rebecca Prigal '79 how many years CESJDS has been a part of her life, she would definitely have to stop and think. Rebecca is not only the Assistant Principal of the Lower School but also an alumna, having attended CESJDS from kindergarten through grade 10, and an Alumni parent. "When I started in kindergarten, the school was operating in the basement of Ohr Kodesh Congregation in Chevy Chase and at the time was the Solomon Schechter School," she explains.

After finishing 10th grade, Rebecca had a big decision to make. As a member of the second starting class of the school - only seven students in all - she had to either graduate a year early or go to Israel for a year. At the time, neither seemed like a viable option for Rebecca, so she chose to go to public school for her last two years of high school before heading to Brandeis for college.

At Brandeis, Rebecca majored in Near Eastern and Judaic Studies with a minor in Psychology and then went on to receive her Masters of Social Work from University of Maryland, Baltimore. Throughout her education, Rebecca focused on learning more about Tikkun Olam, repairing the world, and the importance of Community, two values infused in every aspect of her CESJDS education. She believes the influences on her work in "helping professions" came from her parents and role models who worked at CESJDS.

She names Shulamith Elster, who was Rebecca's Guidance Counselor in middle school and high school and later Head of School, her teachers, and her father, a rabbi, as some of her role models. "My father, along with other local rabbis and some CESJDS parents, fought for civil rights for all, they marched with Dr. King in Selma, traveled to Russia to visit refuseniks, and regularly stood vigil across from the Soviet Embassy. All of these examples tremendously impact a child as she forms her identity and sense of her role in the world."

Rebecca worked as a social worker at the Hebrew Home and later, after staying home for a while with her children, Elaine '10 and Jonathan '14, Rebecca worked at Suburban Hospital in the Mental Health unit. As she connected back with professionals at CESJDS, working here became a new career goal for her. In 1997, Rebecca began as a part-time middle school guidance counselor and part-time human development teacher in the high school. After eight years, she moved on and became a guidance counselor at the Lower School. Two years ago, Rebecca took on the role of Assistant Principal at the Lower School.

When asked about the major similarities and differences of CESJDS then and now, Rebecca immediately responds with, "the core values have stayed the same." She believes these core values have not only infused her education but also have kept the institution and community strong. As for differences, she points to the size of the school, and also the additions to technology, the STEM program, and the integration of academic areas to prepare students for a world where their progress is based on collaborative skills and developing effective partnerships.

When Rebecca is not at school, she loves spending time with her friends and family, going to the movies, exercising, volunteering for causes close to her heart, and travelling. As for keeping in touch with her CESJDS classmates, Rebecca admits that this proves to be a fairly easy task thanks to our school community and social media.