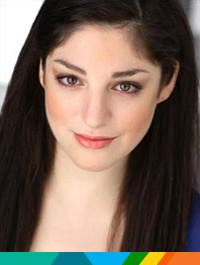 Rebecca Eisenstadt is an accomplished actress and theater professional in New York.  She is also known for her work as a Hebrew/B'nai Mitzvah tutor, having worked with more than 400 students.

Rebecca started at CESJDS in the first grade and was joined by her siblings, Rachel Eisenstadt German '01 and Eli Eisenstadt '08.

From the very start, Rebecca was drawn to Hebrew language, Judaic studies, Torah, and any other subject related to the culture of the Jewish people. Rebecca's memories are strongly linked to this area of her studies at CESJDS.  She recalls several influential teachers, including Mrs. Lerner, Mrs. Kedem, and Mr. Bar-Noy (with whom she had 7th and 11th grade Torah, 10th grade Hebrew, and several years of minyan).

It was also while at CESJDS that Rebecca honed her skills as an actress and performer.  While in high school at CESJDS, she student-directed the middle school musicals.

Rebecca graduated from CESJDS at the height of the Iraq war.  Because of the conflict, the senior trip to Israel and Europe was delayed.  Before the trip's start, Rebecca used the down time to audition for some professional acting companies and landed a role with the Washington Savoyards in their production of "Mikado."  This was the impetus for the start of her acting career.

After CESJDS, Rebecca attended New York University's Tisch School for the Arts.  At Tisch, Rebecca's mix of strong acting skills, combined with mastery of Hebrew and Judaics, made her unique and well-known.  Hearing of this, The National Yiddish Theater reached out to her.  Rebecca is now a professional member of the company and is fluent in the Yiddish language.  Rebecca reflects, "My understanding of myself and my people was enhanced through Yiddish.  We can all be in a toothpaste commercial.  I want my life to be more than the toothpaste commercial."

As a skilled B'nai Mitzvah tutor, Rebecca works with approximately 30 young people at any given time.  Additionally, she uses her theatrical skills to find creative ways to assist her students with learning differences.