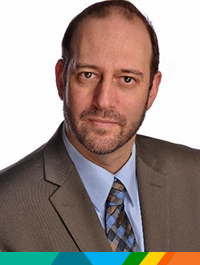 Elliot Goldberg '87 is the Head of School at Solomon Schechter Day School of Greater Boston and received his M.A. in Jewish Education and Rabbinic Ordination from the Jewish Theological Seminary in New York.

Elliot's family had been committed to Jewish day school education even before they moved from Chicago to Rockville in 1977. His Kindergarten and first grade years were at the Solomon Schechter Jewish Day School of Metropolitan Chicago. When Elliot's father Joel took a new job in Washington, DC, the family settled in Rockville to be close to CESJDS and to become part of a strong Jewish community. Elliot's sister Sandy Goldberg Rosenstein '90 is a CESJDS lifer and now lives in Chicago with her family where they are also committed to Jewish day school education. Elliot's mother Judy is a past President of the CESJDS Parent Teacher Association.

The strong Jewish values that were taught at CESJDS were continued at home and at Camp Ramah, where Elliot spent most of his summers. "Beyond anything else, the foundation of my experience was the strong community of CESJDS teachers and friends," Elliot remembers. "The friends that I made at school were so honest and genuine. This made for a terrific environment that was made even better by the teachers who were truly interested in each of us and were so encouraging. It was a place that grew self-confidence."

His current position as Head of School has given him even greater appreciation for the skills and talents of the faculty at CESJDS. "Carol Powers, Gil Cooke, and Rabbi Jan Kaufman are just three examples of the amazing faculty that were at CESJDS, and today I see them as models for the kind of educators that we should attract to Jewish day schools."

In particular, Elliot developed a strong bond with CESJDS Head of School Dr. Shulamith Elster. "I could pop into Shulamith's office anytime and just chat. As I began to chart my career, Shulamith was, and still is, invaluable."

Elliot is married to Rabbi Sheryl Katzman who is an educational consultant for Jewish day schools. Together, they have three children, Michal, Haddas, and Liora, who all attend the Solomon Schechter Day School of Greater Boston.