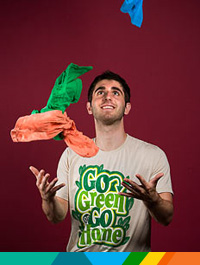 Among the many industries where CESJDS alumni excel, a substantial number have made strides in the world of business and entrepreneurism.   Micha Weinblatt '01, credits his four years as class president for helping him to become the leader in business and the Jewish community that he is today.

As the president of the Class of 2001, he recalls learning the art of marketing and politics.  It was important for him to assemble a strong team and share leadership opportunities by delegating responsibilities.   With the many clothing companies in existence, Micha has managed to set his company, Crooked Monkey www.crookedmonkey.com, apart from the competition. Named one of CNN Money's Ten Generation Next Entrepreneurs to Watch, Micha has his products in over 500 retailers locally and worldwide. He was also named one of the Washington Business Journal's "40 Under 40"  along with Steven Freidkin '02. Crooked Monkey's website just went through an overhaul.  Check it out!

With Jonathan Schilit '01, Micha has a new business venture called Betterific which crowdsources ideas to improve products, asking "Wouldn't it be better if?" Betterific is launching in beta, and is looking for CESJDSers to try out the site before it goes live. If you'd like to join the movement (and we know you do), go to www.betterific.com and sign up for an invite.

Micha is proud to serve as the youngest member of the adult board of the Jewish Federation of Greater Washington, and also of his involvement in Israel Bonds and B'nai Tzedek, where he finds meaningful ways for young adults to get involved and give back to the community.