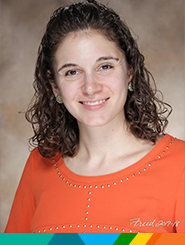 When Marnina Cowan '06 graduated from CESJDS over 10 years ago, she never imagined that she would be back in the hallways of the Annette M. & Theodore N. Lerner Family Upper School Campus as a Middle School Hebrew Teacher. Marnina, who is a CESJDS "lifer" along with her siblings, Amalia '10 and Micah '15, has been surrounded by languages her whole life. When she was a baby, her parents once celebrated Shabbat with couples from all over the world. The only language that everyone had in common was Hebrew, except for them. One of the reasons they sent Marnina to CESJDS is they wanted her to have the ability to communicate with Jews anywhere in the world through a shared language.

Marnina attended Brandeis University and pursued a Bachelor's in Hebrew and International Global Studies and holds a Master's in Public Health. She credits CESJDS in helping to influence her career choices. "It was at CESJDS where I took a course on Jews around the world, where I was first exposed to life in places like Africa and Asia. It was at CESJDS where I took courses on Christianity and Islam and the Israeli-Palestinian conflict. CESJDS helped me realize that I loved learning about other cultures and religions."

CESJDS also helped Marnina understand the magnitude and importance of the global Jewish community. In high school, she recalls being assigned a pen pal at a Jewish day school in Rome. The goal was for the students in Rome to practice their English and the American students to learn about their culture. "While most of the students in my class tried corresponding with their pen pals over email, they received no response and gave up. I continued to persevere, sending my pen pal, Daniel, very short, basic sentences in English, encouraging him and letting him know how excited I was to connect." Marnina was hopeful that one day that she would receive a response, and she did. Daniel wrote back, sent pictures of his family (his father was the Chief Rabbi of Rome and had recently met the pope) and they became true pen pals. She learned all about Jewish cultural practices in his community and thanks to Facebook, the two pen pals are still in touch today and plan to meet one day,hopefully in Israel.

Prior to teaching at CESJDS, Marnina worked for a non-profit that translated Middle East Media to Hebrew and English for distribution, as well as another non-profit working on a global tuberculosis project. Marnina decided she wanted to teach Hebrew full-time, work with a team, and shape students' lives and now she is doing just that and recognizes how differently Hebrew is taught today versus when she was a student. "Currently, CESJDS uses a program called "Hebrew at the Center", which aims to build Hebrew proficiency in listening, reading comprehension, speaking and writing. CESJDS uses the proficiency model to build students' confidence and abilities to truly function in the language. Each Hebrew lesson in the Upper School is structured similarly and students are provided opportunities to internalize the language in ways that extend beyond their textbook that make learning meaningful. Our students may communicate in Hebrew with students in a school in Israel, talk about their school and lives in Hebrew, and create videos presenting themselves in Hebrew."

Marnina is an avid Israeli dancer and is involved in running two local teen Israeli dance troupes. She enjoys spending time with her family, cooking and scrapbooking.

She finds it very rewarding to be teaching at the school where she grew up. "It is a different way to connect with the students. CESJDS has shaped who I am today. I want to help give back to the school which has given me so much."