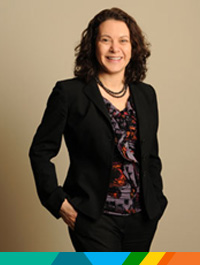 Lila is a nationally recognized real estate attorney and partner at the firm Ballard Spahr, LLP in Baltimore.  Lila’s journey at CESJDS began in 1985 when she enrolled in school starting in 6th grade, her family having recently relocated from Charlotte, NC.  Lila was joined at CESJDS by her sister, Dina Shapiro ’95, and her mother, Arlene Shapiro, who was a teacher.

Lila went on from CESJDS to Haverford College and then earned a law degree at the University of Maryland.  Lila was a religion major at Haverford, and she ties her strong interest in ethics and spirituality to her experiences at CESJDS.

The environment at CESJDS and the values that are instilled created a solid foundation for Lila.  Most notably, Lila recalls a supportive community that brings out academic excellence and a sense of healthy competition among students.  This aspect of student life reflects CESJDS’ commitment to the precept of V’ahavta L’rayakha (a moral, caring community).

Several members of the faculty had a particularly strong impact.  Among these are Dr. Gil Cook, whose English class was creative and rigorous - preparing Lila for college and law school; and Mrs. Sue Zuckerman, who pushed Lila to develop new skills in her role as the Co-Sports Editor for The Lion’s Tale, the student newspaper.  Lila was also a student athlete, running on the cross-country and track teams.  “I was not the best athlete, but the supportive environment at CESJDS gave me the confidence to continue as an athlete into adulthood.  Now, I’m getting ready for my first marathon!”

As a real estate attorney, Lila works to advance the goals of her clients, but also takes time to give back.  She does quite a bit of pro bono work in the areas of affordable housing and serves on the board of Chai, Inc., an organization dedicated to solving housing problems in historically Jewish neighborhoods in Baltimore.

Lila draws upon the spiritual foundation that was developed at CESJDS in her role as Co-President of Kol Halev, her synagogue in Baltimore that is affiliated with the Reconstructionist movement.  “I am so proud to be leading a growing congregation that meets the needs of interfaith families and those who want to explore their Judaism in new and meaningful ways,” Lila said.