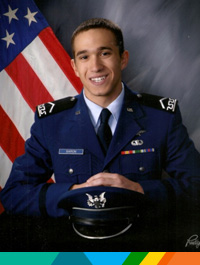 Henry is a Cadet at the United States Air Force Academy in Colorado Springs, CO and is the first CESJDS alumnus to attend the USAFA.  He began in the fourth grade at CESJDS, as his parents were looking for a strong Jewish education for their children.  Henry was joined at CESJDS by his sister, Jenna Baron ’09.

Looking back, Henry sees strong parallels between the values taught at CESJDS and what is expected of him at the Air Force Academy.  In particular, the strong sense of community (V’ahavta L’ryakha) that is instilled at CESJDS prepared him well for life in the military.

“In the Air Force, there is a greater sense of community – the expectation that each person next to you is your brother.  Going to CESJDS prepared me for this principle.  These are household values for the military, as they are for Judaism.”

At CESJDS, Henry ran on the track team, cross country team, and became a student trainer.  Also, Henry was on student council, was part of Shir Madness – the A Capella choir, and was in several musicals.

Mathematics and science came very naturally to Henry.  Among his favorite teachers is Ms. Laura Jacobs, who taught physics.  “Ms. Jacobs put the learning on the students.  It was one of the classes where we were not fed information.  We had to ask questions to enhance our knowledge.  This was great preparation for the USAFA,” Henry remembers.

The Israel and Eastern Europe trip further connected Henry to his Judaism.  The Israel trip includes a one week program with the IDF called Gadna, a training program that offers a glimpse of the IDF experience to Israeli youth pre-army and to Jewish youth from the around the world.  It was during this week that Henry found out that he had been accepted to the USAFA.

Henry sees a strong link between CESJDS and the USAFA.  “The values they want me to hold to as an officer are the values that I have held my entire life.  In the Air Force we believe in integrity first, service before self, and excellence in all that we do.  CESJDS was the same way.”

Looking ahead, Henry hopes to make a career in the Air Force and sees himself as a Jewish leader in the military.  There are currently 26 Jewish cadets at the USAFA and Henry is active in Jewish life.

Henry will begin flight training next year and has already recorded five solo parachute jumps.  He is an Eagle Scout with the Boy Scouts of America.