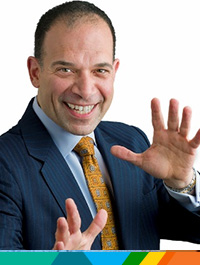 Heinan Landa '83 is the son of Israeli immigrants to the United States.  He is an engineer, entrepreneur, and Hagshama (second generation) parent by virtue of having his son, Adam Landa (Class of 2016), enrolled at CESJDS.

Soon, Heinan and his family will join a growing list of Hagshama families whose children have graduated, truly fulfilling the dream of providing a Jewish day school education to their children.

Heinan's parents, Aviva and Isaac Landa, moved to Montgomery County, MD for a job opportunity when he was two years old.  For many years, they did not seek active involvement in the Jewish community.  As time passed, the feeling of disconnection became more acute, particularly since the family has more than 14 generations of history in Israel.

To address this, Heinan's parents made a purposeful choice to re-engage with the Jewish community through CESJDS.  Heinan enrolled in the seventh grade and his brother, Leor '90, started in Kindergarten the same year.  Their brother, Ronen '97, followed.

Coming to CESJDS provided Heinan a "...grounding in Judaism that has served as my primary rudder when navigating life's twists and turns. The strong community and the great academics all came together for me in ways that became clear as I grew older," he recalls.

There are so many faculty who made a difference for Heinan.  In particular, he fondly remembers Mrs. Rita Wisotsky whose class included a production of The Diary of Anne Frank.  "I gained so much confidence from Mrs. Wisotsky," he says.  Special thanks also go to History/English teacher Carol Powers, Chemistry/Physics teacher Laura Jacobs, and Jewish History/Holocaust teacher Claire Simmons.  "The faculty at CESJDS invested so much time in each of us," he remembers.

After CESJDS, Heinan studied engineering at Johns Hopkins University and then earned an MBA from the Wharton School of the University of Pennsylvania.  CESJDS prepared Heinan for the transition.  "At Hopkins, so many of my classmates seemed lost during their first year. I knew how to study, was independent, and immediately developed a home in the Hopkins Jewish student community."

After Wharton, Heinan founded, Optimal Networks, an IT services firm for businesses and nonprofits  The company operates on three core values:
These corporate values are simply the most recent incarnation of the overarching values that Heinan developed at CESJDS.

Heinan's son, Adam, is a member of the Class of 2016 and has thrived as a student and a member of the CESJDS community, recently starring in the high school production of Xanadu. His daughter, Shari, is in her first year at Oxford University and is active in the local Jewish community, as well.