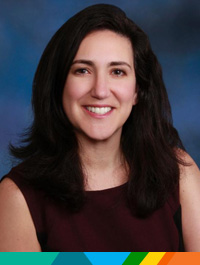 Deborah Topol Rosenberg '89 is the Assistant Dean for Medical Education for the Georgetown School of Medicine at Washington Hospital Center.  She has deep family roots at CESJDS that touch her children, siblings, nieces and nephews, and her parents, Barbara and Allan Topol.  Early on, Deborah's parents enrolled her and her siblings with a "let's see if it works" approach, and it turned into a relationship between CESJDS and Deborah's entire extended family that has spanned more than two decades.

Deborah was part of the first Kindergarten class at the East Jefferson Street location and enrolled with her brother, David Topol '84, and her sisters Rebecca Topol '86 and Daniella Topol '92.  Deborah's two children are currently enrolled at CESJDS; Jessica and Alexander are joined by their first cousins.  Deborah and her brother, David are part of a group of approximately 60 Hagshama (Second Generation) parents at CESJDS.

"One of the best things about CESJDS is that it brings out the best in each individual person," Deborah said.  "I was a quiet and shy kid, but my good friend, Rachel Schreiber '89, helped bring me out of my shell."

Deborah attributes the academic excellence combined with the rigorous curriculum in helping her and her family achieve success in many ways.  "Because of the dual curriculum, I learned how to multi-task in ways that many people don't.  This, combined with the emphasis on Tikkun Olam, gave me core values that I use every single day."

Looking back, Deborah remembers several key educators who were extremely impactful. "June Graff made French instruction so much fun, and Carol Powers was such an excellent American History instructor.  She taught me to be such a great critical thinker - not believing everything that I read."

It is this combination of a values-based education, Tikkun Olam, and critical thinking skills that have helped Deborah excel as a working parent and as a physician.  "The need to think well, but to be compassionate, is so important as a clinician.  CESJDS instilled this in me."

"I spend half of my time seeing patients, and half of my time as a member of the faculty at Georgetown / Med Star Washington Hospital Center.  With all this, my family and children remain the priority.  I couldn't do all this without my husband, Larry."

Deborah lives in Silver Spring, MD and remains an active alumnus and parent at CESJDS.