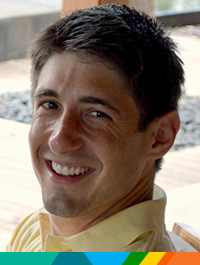 Daniel is a proud CESJDS "lifer," having attended from Kindergarten through 12th grade, and in July 2015 will begin a clerkship at the U.S. Supreme Court for Chief Justice John G. Roberts, Jr.

Daniel received his undergraduate degree from Harvard University where he majored in government and then he continued to Yale Law School. Daniel previously clerked at the Federal District Court in Manhattan and then for a Federal Appeals judge on the D.C. Circuit. He also worked as a speechwriter for Secretary of State Condoleezza Rice and Deputy Secretary of State John Negroponte.

Daniel is the oldest of four siblings (David '05, Dafna '09, and Dore '14), all CESJDS lifers.  His stepbrothers, Cole Aronson '14 and Jonah Aronson, also attended CESJDS.  All, Daniel says, "deeply appreciate" their years at the school. Daniel credits CESJDS with helping shape him academically and personally.  Even after attending Harvard College and Yale Law School, "I've never been graded as rigorously or held to as high standards as I was at CESJDS," he recalls.  High school English teachers like Dr. Tom Worden stand out "for teaching me what it means to think and write clearly."

Daniel's experience as editor of the Lion's Tale student newspaper was also formative.  Putting out an issue roughly every six weeks was "a crash course in writing, editing, and meeting deadlines."  Daniel remembers the emphasis that Sue Zuckerman, the paper's then-adviser (now Chair of Educational Support Services), placed on character.  "Mrs. Zuckerman took ethics seriously.  She made us understand the importance of being fair and the effect our work would have on members of the community."

Many Lower School teachers were also central to instilling in Daniel his lifelong commitment to Jewish traditions, culture, and learning.  Like so many students, he remembers sitting on the floor in first grade, listening to Edith Lowy's personal story of surviving the Holocaust.  And Daniel describes Rochelle Sobel, Carmella Kedem, and Rachel Lerner as helping lay the foundation of his Jewish identity.

That identity, Daniel says, connects him to the Jewish people.  After college, Daniel and three fellow CESJDS alumni toured Southeast Asia.  While traveling through islands off Thailand's coast on a Friday afternoon, they happened across a Jewish community center.  They went back that evening for Shabbat dinner and spent the night talking with Israeli tourists, switching between English and Hebrew.  "The experience," Daniel says, "combined lifelong CESJDS friendships with the lifelong sense of community you feel as a Jew who speaks Hebrew and knows our rituals and traditions."