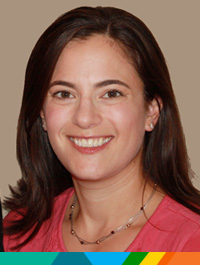 Two years ago, Deborah Karesh, mother of Dana Karesh Pelzman '96, was diagnosed with stage two breast cancer.  Determined to help her through chemotherapy and radiation, Dana and her brothers prepared a thoughtful gift basket for their mother which included items she might need during treatment; Ginger candies for nausea and a shawl to keep her warm, for example.

As Dana continued to seek out more gifts that were meaningful and useful to a cancer patient, she found that the majority of the items available in stores were geared toward supporters and survivors and less for the person actually in treatment.

To fill this void, Dana created a set of handmade bracelets for her mother, one for each treatment of chemotherapy and radiation.  Her idea was that her mother would begin wearing all of them on one wrist, and at the end of each session, Deborah would transfer one bracelet to her opposite wrist to symbolize her progress and show that she is one step closer to finishing her treatments.  Her bracelets generated so much interest that Dana launched her jewelry business, ChemoCounters, and donates a portion of the proceeds to breast cancer research.

Dana credits CESJDS for teaching her the value of compassion and sympathy.  She fondly remembers learning to think, "What can I do for other people?"  During her senior year, Dana was one of the recipients of the The Simon Hirshman Community Service Award for earning 200 community service hours by volunteering in hospitals, at her synagogue and homeless shelters.  "CESJDS taught me the importance of helping others and valuing those in my community," she says.