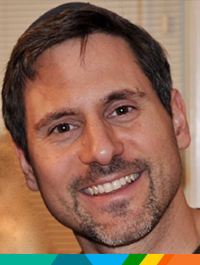 From a very early age, Dan Schwartz '93 recalls always wanting to become a physician. "I remember being in Mrs. Barkin's third grade class and writing in my journal about how I wanted to be an orthopaedic surgeon for the Boston Celtics. Mrs. Barkin told me that I needed to learn how to spell the word orthopaedic before becoming one." Although Dan's dream to work with the Celtics did not happen, he did become a renowned cardiologist specializing in general and preventive cardiology, cardiovascular imaging, ischemic heart disease and congestive heart failure.

Dan, his parents, and sister Lonnie moved from Boston to the Kemp Mill area when he was in second grade. He was welcomed by Mrs. Kagen who knitted him a pink and brown kippa, as she did for all of the boys in her classes. Dan also fondly recalls making a marionette in her class and admits the marionette remains at his parents' house today. It was also in second grade that Dan met his first friend at his new school, Eric Forseter. The two friends went through CESJDS, graduated together, and remain close friends today.

Judaic studies were very important to Dan. "I really appreciated the academic approach the school took in teaching Judaic sources." Dan recalls working on a Jewish term paper on free will and predestination with Rabbi Greenvald in eleventh grade. Throughout this project, Dan came to appreciate the way in which Jewish ideas develop over thousands of years.

Dan always liked cardiology because it is a ''varied field", as he describes. The idea that the field includes preventative care, critical care, imaging studies, and procedures drew him to the specialty. About nine years ago, he joined a practice here in Montgomery County called Maryland Heart, which later was acquired by Johns Hopkins Community Physicians and is where he practices today.

Dan does admit that cardiology can be a challenging career. "Although, there have been so many wonderful advances in cardiovascular medicine there is not always a happy ending." However, Dan is reminded of the Hippocratic (and Maimonidean) principle that although physicians are not always able to cure they should always endeavor to comfort. Dan stands by these words. In 2015 Dan was named Best Consulting Physician at Johns Hopkins Community Physicians. He is credited for being an excellent communicator who develops a meaningful rapport with his patients, many of whom are CESJDS parents, current and former teachers, and even students. He also has been recognized by Washingtonian magazine in 2014, 2015 and 2016 as a Top Doctor.

When asked what his greatest accomplishments are personally, Dan professes that marrying his wife Shira and raising their three daughters ages 10, 8 and 3 top the list. Shira and Dan are very active with Maayan Chadash, a partnership minyan that Shira started in the Silver Spring area, which is committed to maximizing women's participation in prayer services within the confines of Jewish law as defined by Orthodox Judaism. Dan also enjoys running and has completed the U.S. Marine Corps Marathon in addition to other races.

"I feel very fortunate that I was able to attend CESJDS, an institution that gave me the tools to pursue my academic interests; more importantly, though, CESJDS helped shape my identity so that I could lead an engaged Jewish life focused on family and community."