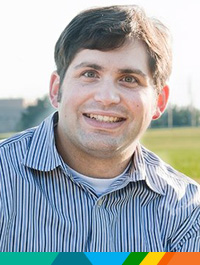 Dean Roslyn Landy delivered the following introduction at Siyum as she announced Carey Heller ’03 as the recipient of the Keter Shem Tov (Crown of the Good Name) award:

“{Carey Heller} is highly respected by his peers and by the faculty for his patient but persistent manner and his honesty and integrity. His willingness to help others is evident in all that he pursues. His generous spirit and compassion will certainly help him reach his goal of becoming a child psychologist.”

Carey's interest in becoming a psychologist developed when he came to CESJDS in the 7th grade. He saw the tremendous difference that a caring Jewish community, strong friendships and supportive faculty make in easing the transition into adolescence and adulthood.

On the advice of CESJDS’ College Guidance counselors, Carey attended Muhlenberg College, where he majored in Psychology and minored in Jewish Studies. He also ran a mentoring program for adolescents involved with the legal system, for which he received a community service award.

Carey graduated from Muhlenberg in 2007 with honors in psychology. His sense of connection to the Jewish community and his dedication to serving others, fostered at CESJDS, led him to pursue a doctorate in clinical psychology at The George Washington University.  At the end of his graduate training, he interned at Jewish Family Services in Richmond, Virginia.

Now Carey (along with his wife, Hope) is in private practice in Bethesda, Maryland as co-owner of The Heller Psychology Group LLC (www.hellerpsychologygroup.com). Carey provides psychological and psychoeducational testing for learning disabilities, ADHD, mood disorders and behavioral issues. In addition, he provides individual and family therapy services to children, adolescents, and adults. He even uses study strategies and classroom techniques that he learned at CESJDS in his clinical work with children and adolescents.

As Dean Landy predicted, Carey has fulfilled his dream of becoming a psychologist and is living up to his Keter Shem Tov award.