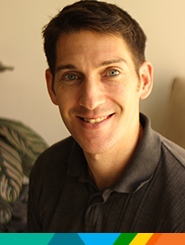 Avi Jacobson '00 is an Investment Officer with SunFunder, a solar finance business based in San Francisco and Tanzania with a mission to unlock capital for solar energy in emerging markets, where over 2.5 billion people live without access to reliable energy. In simpler terms Avi explains, "we lend money to solar energy projects that serve people with very limited or no access to electricity in the developing world."

Avi is a "lifer", attending CESJDS from Kindergarten through 12th grade, as did his sister, Shira '04. Their brother Jeremy attended Walter Johnson High School and is an active member of the Jewish community in Rockville. Avi recalls CESJDS as a warm and inviting place and always being surrounded by friends.

Whether he was playing baseball, participating in cross country, or as Avi views it, "torturing audiences" as Lazar Wolf in his eighth grade adaptation of Fiddler on the Roof, Avi remembers strong teachers who were not afraid of pushing him to do his best. When he now looks back at CESJDS, he views this as a positive force in his formative years that he did not fully appreciate at the time.

After CESJDS, Avi attended University of Michigan and graduated with an engineering degree. He is also a graduate of the Naval Postgraduate School, and the Case Western Reserve University School of Law. Early in his career, Avi served as a Special Operations Weather Team leader in the United States Air Force and Air National Guard and is a veteran of Operation Iraqi Freedom.

He believes his general sense of duty and service came from home, but was fostered at CESJDS. Prior to SunFunder, Avi was the Director of Market Analysis with Lumos Global, a solar home provider focused in West Africa. "I was lucky enough to have had some excellent teachers across many different disciplines at CESJDS. This gave me an educational foundation to pursue a variety of different career paths. I've done business in Hebrew, reviewed Mexican Energy regulations in Spanish, and ran many more miles as a paratrooper than I did in cross country back in high school."

A few years ago, Avi and his wife Rachel made the decision on a whim to move to Israel with their son Sam. A few months later, daughter Adira was born. It was then that Avi realized how well his experiences at CESJDS prepared him to live there. "I remember having Mrs. Kedem in third and fifth grade for Hebrew. She would speak to us strictly in Hebrew. It was an immersion style environment which was incredible to be a part of at such a young age." Avi marvels at the reality and opportunity to work for an American based company doing business across Africa and South Asia while living in Israel.

Although Avi confesses that he is not great at keeping in touch, he admits that some of his closest friends are still those he went to school with at CESJDS. He does have the chance to visit with them, his parents, siblings, and their families a few times of year, when he comes back to Maryland.