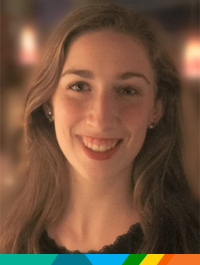 In ninth grade, Arielle Green '12 remembers a difficult transition from Gesher Jewish Day School in Virginia to CESJDS. The daily commute and only knowing three students who came from Gesher with her, took some time for her to feel at home. Eventually the commute became routine and CESJDS became Arielle's community.

At CESJDS, Arielle fell in love with science and music and credits many of the Upper School faculty for encouraging her passions. "Mrs. Agzigian is the reason I took biology and all science electives. Ms.Ball pushed me to continue learning. " As for music, although she played guitar since she was little, she stopped in high school because she just did not have enough time and replaced it with A Cappella. "The more I learned about the music and what it meant, music became even more important to me." She credits Dr. Solomon for teaching her how to be a better performer.

After graduating CESJDS, Arielle went to University of Rochester, where she received a Bachelor of Arts in Music and a Bachelor of Arts in Environmental Studies. "University of Rochester is one of the only schools that would allow me to study everything I wanted without giving up anything." At Rochester, Arielle continued her passion for A Cappella and even started some groups of her own. It was at that moment, that although she was creating opportunity for herself, she also found how important music was to others. "People wanted to share their love of music and come together and sing, and be a part of a community." This is what led Arielle to apply and be accepted into the H.L. Miller Cantorial School at The Jewish Theological Seminary. She is currently in her third year. "It is something I have wanted to do for a long time," she explains.

"My teacher once said to me, there are 29 things that a cantor needs to have to be successful and #29 is a nice voice. "Arielle believes that this wasn't always true, but now sees the needs of our communities changing and people are not willing to sit in services and listen to someone pray for them. They want to be an active participant and cantors need to be able to adapt to these changes and help people find meaning in their lives.

When asked what the difference is between today's cantors and the cantors we all grew up with, Arielle explains. "There are only two students in my class year and a total of 12 people in the entire school. There is a current need for cantors and music education in Jewish environments, and today's cantors use music as a tool to educate and to help people through hard times. The job has changed so much. Our job is to inspire with music, to sing WITH people not to sing TO people, and to sing with our community." She clarifies that there is still an element of performance involved, but says the majority of the role is pastoral and spiritual.

Arielle believes it is important to do what you love. She is always looking for ways to combine music and science, which were her two loves when at CESJDS. Last summer she had the opportunity to work at Camp Ramah in Northern California, which is located on the shores of the Pacific Ocean. Arielle taught music there but also taught marine science. Even though people have told her to choose between two things she loves, she continues to try and find ways to make both work. She wholeheartedly believes "that switching paths is ok and choices are terrific, but it also is amazing to know you do not only have to choose just one thing, and giving up on things is not always necessary".

Arielle is expected to graduate from the cantorial program in 2020. She currently is the Cantorial Intern at Park Avenue Synagogue in New York City, and is also a member of Hudson Sound, the JCC Manhattan 20s and 30s A Cappella group.