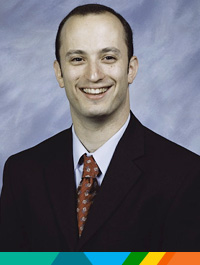 Charles E. Smith Jewish Day School has a reputation of graduating students who go on to become Jewish professionals serving communities all over the world.  Rabbi Ari Sunshine (Class of 1990), is a well respected spiritual leader, alumnus, and current CESJDS parent of Jonah (Class of 2021) and Elana (Class of 2023).

Ari says he and his wife, Jennifer, "felt strongly that if the opportunity presented itself to send our kids to a thriving and respected day school, we would."  He feels a great source of joy and satisfaction to be able to watch his children flourish at CESJDS.  Ari adds, "I love to see my kids from a young age start their formal Jewish journey in the same setting that I started mine and to see them excited about what they are learning, and sharing it at home."

Many things led Ari into deciding to join the rabbinate.  He credits his family for laying the foundation for his Jewish identity and to CESJDS for enhancing it.  Viewed as a leader by his peers, he was chosen to serve as a regional president of the Seaboard Region of United Synagogue Youth (USY) - a major job, and honor, for a high school student.

While studying at Brandeis, Ari thought his path would lead him to law school.  But, after consistently dedicating his Shabbat to leading the conservative Minyan on campus, and studying abroad in Israel, he learned an important lesson in the summer of 1993.  While leading USY on Wheels, a six-week teen bus tour around the U.S., he taught his students that "being Jewish is portable"--it goes with us everywhere, and all the time.  Up until then, he knew he would lead an actively Jewish life, but then determined he wanted to share his passion for Jewish living with others.  After a three year stint as Youth and Ritual Director at Temple Israel in Sharon, Massachusetts, Ari began rabbinical school in 1997.

Without a doubt, Ari's time at CESJDS helped prepare him for his courses at the Jewish Theological Seminary.  He already knew Hebrew and had honed the critical thinking and analytical skills needed to study Jewish texts effectively.

Previous to his current role as the Rabbi at B'nai Shalom of Olney, Ari served as Associate Rabbi of Temple Israel in Charlotte, North Carolina.  Ari enjoys ministering to people in all types of situations as a teacher, pastor, counselor, and friend.  His favorite part of the job occurs when he gets to know his community and brings them closer to Jewish traditions.