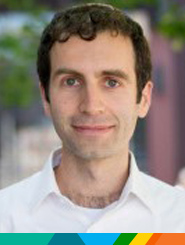 Dr. Ari Johnson '00 is the Chief Executive Officer of Muso, an organization that successfully partners with communities and the government in Mali to work with the poor, not for them, in solving medical and social crises. Additionally, he is a physician at the University of California San Francisco and a graduate of Harvard Medical School.

Ari and his brother Ethan Johnson '96, who has played a major role on Muso's Board, are CESJDS lifers, having attended K-12. Growing up in Chevy Chase, MD, his family was committed to the Jewish community, and Jewish practice and study were a central part of family life.

Studying Jewish texts in the Lower School is an experience he remembers the most. In particular, Mrs. Rochelle Sobel's 4th grade instruction in Hebrew Rashi Script and the Torah study with Mrs. Rachel Lerner in 3rd grade are experiences that have stayed with him.

Ari credits CESJDS for helping him to develop an analytical mind and a commitment to Tikkun Olam. "Mrs. Sue Zuckerman and the CESJDS English department taught me how to write. I use what they taught me every day to advocate for the patients we serve," Ari said. Also, some educational experiences have proved to be useful later in life when least expected. "When I was in French class, I never thought I'd be where I am now, working in francophone West Africa, writing half my emails in French and having half my conversations in French. When I took chemistry at CESJDS, I never thought I'd end up going to medical school."

After CESJDS, Ari attended Brown University, and before attending Harvard Medical School, organized a Shabbaton with the goal of trying to give attendees a meaningful Jewish experience. He was disappointed when he learned that at least one person did not find the program to be worthwhile. "I began reorienting and questioning my own life path, thinking about how I could serve," Ari remembers.

In 2005, while in the African nation of Mali, Ari saw the extreme poverty and chronic health problems. A neighbor's son was in respiratory distress and died. Attending the funeral, Ari began to think about how this needless loss could have been prevented.

Muso was created by Ari and fellow Brown University alumni with the vision of addressing the underlying cause of the health crises in Mali by working in partnership with poor communities. They created community action committees, engaged local leaders, and recruited the Malian government as a partner. In the first pilot community, child mortality rates dropped from 15% to 2%. According to several relief organizations, this is the fastest child mortality decrease outcome in history. "We have accomplished so much, but there is so much more that we could and should be doing," Ari says.

Ari lives in San Francisco, CA and spends a good portion of each year in Mali. He is married to Dr. Jessica Beckerman, Co-Founder of Muso and an OB/GYN.