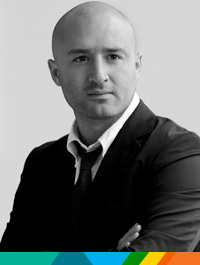 Andrew Zuckerman ‘95 is a noted filmmaker and photographer who utilizes a multitude of platforms to produce work that is systematically executed, conceptually based, and democratically presented. Minimalist in nature, Zuckerman aims to create atmospheres of clarity and neutrality to facilitate the viewer’s access to the material.

His books have been translated into numerous languages and published in 18 international editions. Zuckerman’s 2007 short film, “High Falls,” premiered at the Sundance Film Festival and was selected as Best Short Film at the Woodstock Film Festival. His work has been exhibited extensively worldwide, and has been collected in and commissioned for public and private collections.

He lives with his family in New York City.