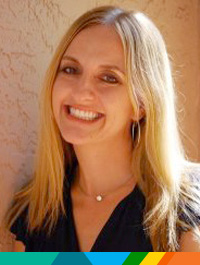 Sometimes it feels like the most important event in Allison Nazarian’s life happened before she was born. That’s because Allison is the granddaughter of Holocaust survivors.

Allison’s mother, Lily Blankstein z”l, was a Jewish history teacher at CESJDS. Allison’s grandmother, Paula Dash z”l, shared her story with students at CESJDS and throughout the community over the years (as did her grandfather, Sol Dash z”l). While in graduate school in 1997, Allison started writing a book about three generations of women in the aftermath of the Holocaust. The next year, however, Lily passed away and Allison’s first child was born, so the book project was moved to the back burner. Fast-forward about 15 years, and Allison knew it was time to complete this project, which she now knew was not only a family memoir, but a journalistic study of grandchildren of Holocaust survivors themselves.

The Holocaust was ever-present in Allison’s and her sister, Erica’s (CESJDS ’95) life. Allison, like many other “3Gs” she has interviewed for the book, used to think that the Holocaust history was for her in some ways a burden, but she now realizes that it's ultimately a blessing. While the story of the Holocaust is not as present in Allison’s own kids’ lives as it was in Allison’s and Erica’s, Allison knows how important this history is both within the family and to the world at large. Now, more than ever, as the population of survivors dwindles, it is often the grandchildren – the last generation that will have truly known these eyewitnesses to history – who have become the torch bearers of a story that moves further and further into the past.

Allison, who works as a copywriter for corporations and agencies, became interested in writing while in college at the University of Pennsylvania. Upon graduation, she lived in New York and worked for an advertising agency. During that time, Allison, her mother and grandmother took a trip to Eastern Europe and visited Lodz, Poland, her grandmother’s home. This incredibly impactful and emotional trip was a turning point for Allison, both personally and professionally, and she knew then that someday, she would be a writer and write about this experience. A few years later, she was off to Columbia University for her graduate degree in Journalism. As a student in a small, highly selective book-writing seminar there, she first developed an initial proposal for the book.

Once Allison again started working on the book in earnest last year, she reached out to fellow CESJDS alumni in an effort to build a network of people that had similar experiences as grandchildren of survivors. She began conducting interviews with grandchildren all over the world, and the stories multiplied.   Now there’s a book agent and a light at the end of the tunnel. Allison hopes to publish the book next year.

Throughout this process, Allison realized that her connections – new and old - with fellow alumni and the CESJDS community are invaluable to her success, both as an author and in her role in this world as a grandchild of a Holocaust survivor.