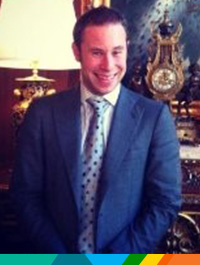 Alex was a lifer at CESJDS going from Kindergarten all the way to graduation. His brother, Andy '09 and his sister, Samantha '14, were lifers, as well. Their parents, Mark Gruhin and Susan Bierman-Gruhin, were looking for a supportive and nurturing environment with an emphasis on Jewish values. They found this at CESJDS.

"The supportive culture at CESJDS helped make me so outgoing," Alex recalls. In particular, Alex's fifth grade general studies teacher, Susan Roth, z"l, who worked as a member of the faculty for decades, personifies the warm environment. "She was a tough teacher and projected a stern personality. But, when I was in a Shakespeare performance at the Round House Theater, I looked up and Ms. Roth was there with my parents."

Dr. Geraldine "Gerry" Nussbaum, the Principal of the Lower School for more than 23 years and Elaine "Chani" Parness, who was a teacher of music and other subjects, created an environment based on encouraging confidence. "I had an obsession with Jerry Lewis. Dr. Nussbaum and Mrs. Parness let me do a Jerry Lewis tribute performance to the entire third grade in the auditorium."

In the Upper School, Alex had a column in The Lion's Tale student newspaper, "According to Alex," where he reviewed movies, restaurants, and theater. This column turned into an internet business, www.accordingtoalex.com, where subscribers learned about artistic opportunities, and could also get access to performance tickets.

Theater and arts were not the only areas where Alex was able to excel. Because of the small classes and the supportive environment, being successful outside of his primary interest area became possible. "CESJDS forces you to put on a lot of hats in the course of the day. I would work on science projects with Mr. Nick Miller and Mrs. Kimberly Agzigian and then get ready for a theater review that night. They are legends in my book."

After CESJDS, Alex attended the Cornell School of Hotel Administration, which mixed his interest in theater with management. Returning to Washington, DC, Alex was hired by the St. Regis Hotel as the Cultural Attaché and Curator of the St. Regis Guest Experience. In ten months, Alex took the hotel's Trip Advisor ranking from #42 to #14. Most recently, Alex has taken on a new project, steering Living Social's program to curate unique culinary and entertainment experiences in the Northeast.

Alex lives in Washington, DC and remains connected to his network of CESJDS friends and contacts. Looking back, he recalls, "I'm a culture maven. Because of my years at CESJDS, the culture of the Jewish people is now a part of my DNA. The world around me has a context that few others have."