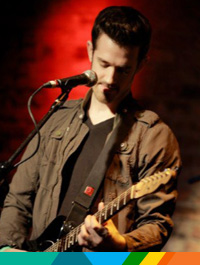 Enrique Iglesias is currently touring the country, and accompanying his band is the Charles E. Smith Jewish Day School's very own Alex Feder '01.

While earning a degree in Jazz Music Performance from New York University, Alex formed a band, The XYZ Affair. Touring from 2002 through 2009, Alex was the band's song writer, singer, and guitar player. One of The XYZ Affair's hit songs is called "All My Friends" and was written about Alex's friends at the Charles E. Smith Jewish Day School.

Involved in every music ensemble at CESJDS, Alex began to develop his musical talents. He believes that while his NYU classmates may have had more opportunity coming from larger high schools, the small and intimate music department here allowed him to be a leader and concentrate on his own music. He credits his high school experience for teaching him morals, values, and the ability to interact with and relate to people. Alex says, "Every professional opportunity I've ever been given has come about through friendships that I've forged with other musicians, and CESJDS is certainly a very big part of my tendency to form long-lasting and deep friendships."

One of these relationships led Alex to stand out through multiple auditions, and earned him his position as Enrique Iglesias' guitarist. He has has spent most of this year touring with the band. While Alex feels very fortunate to have his current job, he works hard daily to improve his singing, dancing, lyric and song writing, and guitar playing and aspires to one day make a living playing his own music.