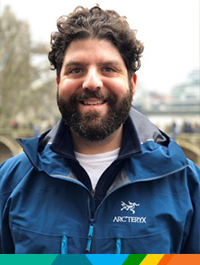 How many five years olds know what they want to be when they grow up? Well for Adam Friedlander '97, the visit he made at age five to his pediatrician's office confirmed that was the field he was going to pursue. He can't exactly articulate what it was about that visit, but he remembers leaving the office and announcing he wanted to be a doctor. And although he discovered and pursued many other interests at CESJDS and in college, today Adam practices adult and pediatric emergency medicine at Northside Hospital in Atlanta, where he is the Director of Pediatric Emergency Medicine.

"Many of my relatives are physicists, so growing up; I always thought I would pursue some type of career in science." In his junior year at CESJDS, Adam participated in a school program at the National Institutes of Health for students who were interested in science. With the mentoring of Dr. Stephen Straus (z"l), CESJDS alumni parent and the first director of the National Center for Complementary and Alternative Medicine (NCCAM) at the National Institutes of Health (NIH), Adam shadowed Dr. Straus in his lab and even interned for him during the summer. It was there that Adam discovered how much he enjoyed interacting with patients. Dr. Straus, who had a MD not a PhD, encouraged Adam to do what he liked and follow the strong passion he had for clinical medicine. It was this very internship when Adam realized he was headed in the right direction of becoming a doctor.

Adam attended Princeton University after graduating from CESJDS and chose to study Economics rather than a typical "pre-med type" major because he felt it was his last chance to study something outside of medicine. Adam chose Princeton because he wanted to be challenged by the top-notch professors and education that is offered there. "Many of my teachers at JDS were a lot tougher than my professors at Princeton", explains Adam. "Dr. Cook taught me how to write and she was definitely a tougher grader than any of my professors at Princeton." Adam graduated from Princeton in 2001 with an AB (how Princeton refers to a Bachelor of Arts) in Economics.

Adam then took a year off and was a counselor for YearCourse through Young Judaea, before completing medical school and a five-year residency in Emergency and Pediatrics at University of Maryland School of Medicine. Adam believes he has the best job in the world and also believes that it was the CESJDS community who helped him achieve his goals.

Adam explains how a family hardship which he and his brother, Jason '95, experienced in their formative years at CESJDS, was never the focus of their lives, thanks to the CESJDS community. The boys' friends, parents of their friends, faculty, and administration never allowed the brothers to feel like they didn't have the network of support they badly needed.

"I don't think I would know what community is if it weren't for JDS. This community kept my brother and me from falling," explains Adam.

And many of these friends and faculty Adam still keeps in touch with. He and fellow classmate Matt Pickar '97 remain best friends today. They first met in kindergarten class in 1984. Paul Blank attended one of Adam's A Cappella concerts his senior year at Princeton. Adam jokes that he wishes there was unlimited space to print all the stories he shared about his amazing JDS family. "The encouragement and ever-lasting friendships from this community have made me who I am today."

For these experiences and connections, Adam gives back to CESJDS through the Ma'ayan Alumni Campaign and is an active member in the Atlanta Jewish community. "There are two organizations that have supported me throughout my life and helped me get to where I am today. CESJDS and Princeton. I always said when I got to the point of being able to give back, I would."

As for Adam's biggest accomplishment, that would be his almost eight-year marriage to his wife Megan. "Prior to meeting Megan, I was not convinced that I was going to get married. Megan changed that for me." The two enjoy traveling, hiking, home projects, and are self-proclaimed foodies. And, now they will add parenting to the list as they are expecting twins in the fall.